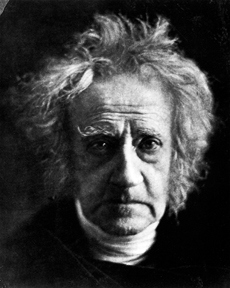 Though not the first to coin the term “photography,” Sir John Herschel (1792-1871) encouraged its use to describe more succinctly the nascent process by which the recording of light generates an image. When translated from the original Greek, photography becomes “lightwriting.”

Herschel also contributed the terms negative, positive, emulsion and snapshot. He invented cyanotypes, the precursors of modern blue prints and was the first to use glass plate negatives. Before his discovery of the hypersensitivity of silver bromide, the exposures required for image creation were too long for practical portraiture. That is why early nineteenth century portraits depict stiff faces and hands clenched to arm rests; it’s hard to hold a genuine smile for more than an instant, let alone several minutes.

By far, Herschel’s most important gift to the art of lightwriting was hyposulfite of soda. Others had been able to record light, but none had been able to arrest or “fix” its action upon silver salts. Without fixer, (or hypo as it was once called) images are not permanent. This knowledge he shared freely with the photographic principals of his day without any expectations of compensation.

Julia Margaret Cameron, a family friend, took this portrait of the gentleman scientist in 1867. May Herschel’s inquisitive and generous spirit permeate all things photographic, now and in the future.